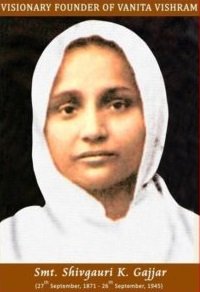 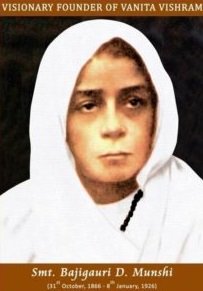 Vanita Vishram was established on 15 th May, 1907 and on the auspicious day of “Akhatrij” by two widows, namely, Smt. Bajigauri D. Munshi and Smt. Shivgauri K. Gajjar. They founded the “Ashram” with their valuable savings of Rs. 2000. They founded an “Ashram” in Surat with a mission to ameliorate the condition of Gujarati Hindu women of the  Bombay Presidency and other places; to elevate their social status by educating them in areas leading to their material, moral and spiritual upliftment. It was established for the welfare of helpless, destitute widows or divorced women.

Smt. Bajigauri D. Munshi was born in a Nagar Brahmin family to Shri Dolathrai and Mahijan Gauri. Unfortunately, she became widow at the young age of 22. Besides being practical in her approach, she was mentally and emotionally strong and it is evident in the efficient manner in which she handled the Ashram administration. Smt. Shivgauri K. Gajjar was born in a religious Gajjar family. She possessed simplicity and foresight. She too became a widow at the age of 17 years. She was instrumental in making Vanita Vishram a self-reliant trust. She managed the financial aspect of the trust diligently.

The painstaking efforts of these two widows and the humble beginning of Vanita Vishram in 1907 have resulted in a  phenomenal academic proliferation over a period of hundred years.